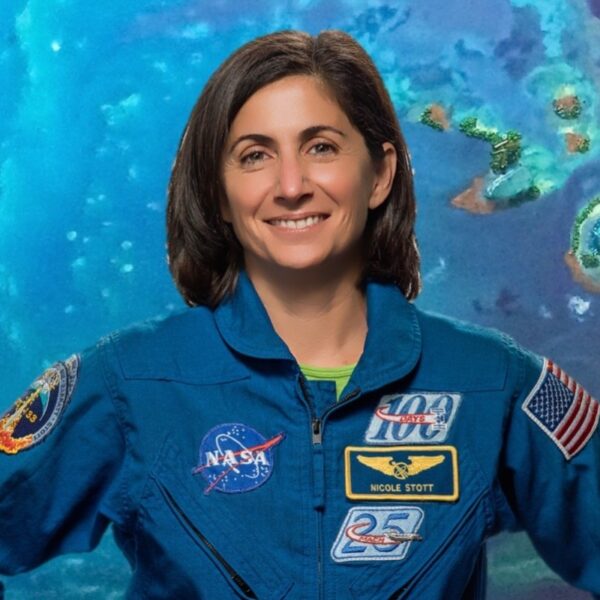 This month students and adults from Roaya for Astronomy and Space Applications in Libya had a special meeting with former NASA astronaut Nicole Stott. Mike Simmons, founder of Astronomy for Equity, joined Nicole along with Roaya leaders Atiyah Alhasadi and Jowhar Ali, who translated.

Students in Libya are growing up in the aftermath of war and political unrest. The 2011 revolution, part of the Arab Spring, led to a fractured government and civil wars, leaving casualties and displaced families in its wake. A six-year war against ISIS left the infrastructure shattered, along with an economic crisis and reduced health services. But the biggest casualty has been education.

With many schools reduced to rubble, transformed into military barracks, or used as shelters for displaced families, getting an education in Libya is difficult. Young people have suffered post-traumatic stress disorder (PTSD) from living with gunfire or losing family members. Recently, political settlement for a unified government provided hope, but then COVID-19 closed many schools, further destabilizing Libya’s vulnerable youth.

Where other science labs don’t exist, the natural laboratory above is accessible to all, day and night. Realizing that hands-on experience inspires students to pursue STEM careers, the Roaya team started Roaya Astronomical Clubs in Libyan Schools a project that brings STEM education to children in five Libyan cities – Tripoli, Sabha, Sirt, Benghazi, and Derna – through astronomy workshops and meetings with astronauts and scientists.

Nicole showed the astronomy students pictures from her experience in space and encouraged the students to follow their dreams. Some attendees were so excited to virtually meet Nicole Stott that they posted their gratitude on social media afterwards.

Interactive education and recreational activities after school and on weekends bring awe and wonder back into the lives of these children. Workshops provide psychological support through building handmade astronomical models and competitions. A new, unified network of astronomy clubs in the most war-impacted cities will help rebuild peaceful social interaction and educational institutions.

Roaya, which in Arabic means “vision,” or “first sighting of the new moon,” provides hope and inspiration for children, allowing them to see a future for themselves and their country. This project is a model for other schools and cities, helping the country recover in youth education and bringing hope to survivors of war.

Astronomy for Equity  brings together the resources of the worldwide astronomy community to support STEM outreach and education for marginalized communities. Astronomy enthusiasts in every country share their passion for understanding our place in the Universe. Astronomy fascinates us all, and shows us how we are all fellow crewmembers on Spaceship Earth, and that we all share the same sky.

Astronomy is a gateway science, touching on all STEM fields — Science, Technology, Engineering, and Mathematics. Everyone deserves the opportunity to learn and follow their dreams, regardless of where they were born or who they are.

In countries lacking facilities, the passion of teachers and volunteers in astronomy is the greatest resource. Often, a small telescope or other item is all that’s needed to unlock the passion and potential of those who share the sky and the science of astronomy with others. Astronomy for Equity provides these resources, allowing passionate teachers and volunteers to share with and educate others. With the help of generous donors, these small keys can unlock a universe of potential.

“Education is the path to a bright future.”
—Tanzanian proverb

"Astronomy for Equity will bring the sky to those who need it most..." - Phil Plait

"Astronomy should be for everyone. That's why we should support Astronomy for Equity..." - Frank White